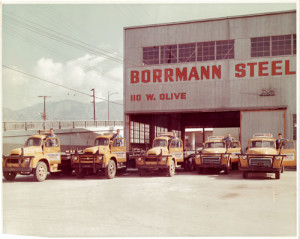 The Borrmann Metals was named for its founders, Mr. and Mrs. George R. Borrmann, and today is considered a model of metal service centers.

George and Jane Borrmann have been pioneers in metal warehousing, sales and distribution on the west coast since 1919. Always an innovator, it was George Borrmann who invented and patented unique racks for steel bar angle, channel and pipe stock that is still in use today. He also originated the idea of Federal Deposit Insurance for bank deposits (FDIC). His dedication, business sense and resourcefulness were qualities that formed a solid foundation for the company.

A native of Texas where she matriculated at the University of Texas, Mrs. Borrmann has always been actively involved in the company so that when George Borrmann died in 1973, the company was able to continue uninterrupted operation under her leadership and guidance. Mrs. Borrmann has represented the U.S. Steel industry at various national and international functions such as the Belgian World Steel Service Center Convention. 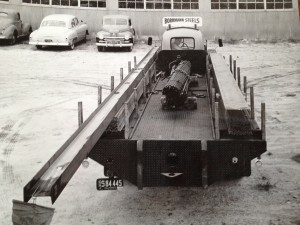 Always active in cultural, civic and charitable endeavors, Mrs. Borrmann has served as chapter president of the Navy League of the United States. She is also a life member of the Mary and Joseph League, and “The Muses”, the support group of the Los Angeles Museum of Science and Industry.

Today Borrmann Metals remains a model for metal service centers everywhere. The next generation now owns and operates Borrmann, maintaining the same quality, integrity, and service established by its founders.